Hit Rail envisions a modern European railway environment which is even more effective, collaborative and value-for-money than it is now. The vision is in full alignment with the existing policies of the railway international bodies, and reflects the European Union’s strategic goals for rail transport.

In order to provide value and better services to its shareholders and customers in the coming years, Hit Rail decided to move up the value chain beyond its existing IP-based Virtual Private Network (VPN), while capitalising on its unique value proposition as a “network” of choice and of trust for the European railways.

The Hit Rail Strategy 2011-2016, adopted by the Supervisory Board in January 2011, empowers the company to offer not just network services, but also software-based services to enable interoperability and to support small Railway Undertakings (RUs). 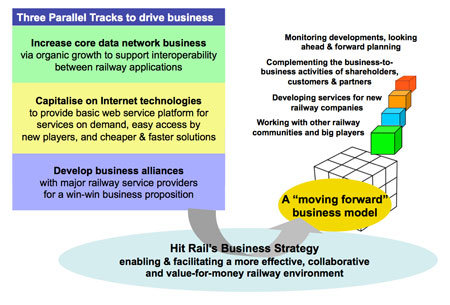 The strategy recognises that Hit Rail is a provider of utility services to the railway community to:

Under the new business strategy, Hit Rail is committed to:

* In accordance with the vision of “ISU - Interoperability Service Utility” published by the European Commission DG CONNECT in relation to Future Internet Enterprise Systems (FInES, http://cordis.europa.eu/fp7/ict/enet/ei_en.html).